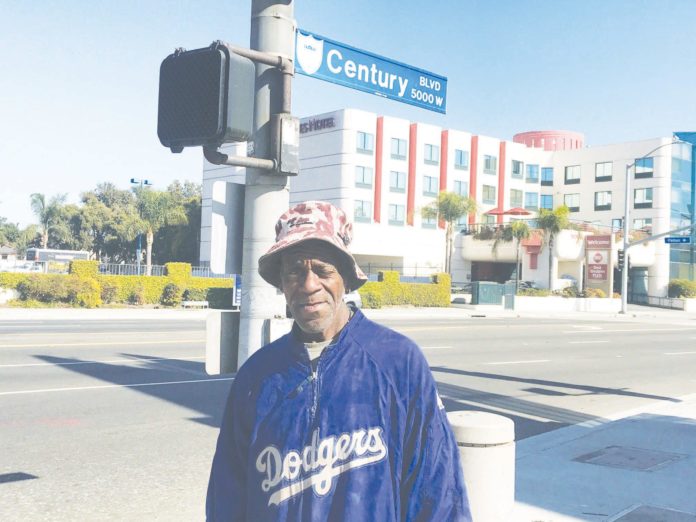 It’s another beautiful day in the neighborhood, a blue sky Friday at 10:30 a.m. in Inglewood and Michael Steward is taking his shift at the northbound 405 freeway at the Century Blvd. exit.

A short distance from here is where all the action is. The billion dollar Sofi Stadium, bustling card games and off track betting at Hollywood Park Casino, Inglewood is a city on the cusp of moving from the shadows of Los Angeles and into the spotlight.

However, while the city is on the move so to are the homeless people encamped under the 405 freeway on Century Blvd., and scattered throughout other parts of the city.

The plight of homelessness here is not on the scale as many other major United States cities, but it is quietly escalating.

According to the most recent available statistics about 506 homeless people were counted in Inglewood in 2018, including about 200 who lived in transitional and emergency housing.

Steward is among those counted as homeless and it is a plight that he has been enduring for more than 20 years.

On this day he sat in a wooden chair at the edge of the freeway with a cardboard sign soliciting food. He says that it’s his shift on the off-ramp and hopes to collect enough money to last for the day.

He says on a bad day he can collect about $18 and he has enjoyed some days where he collected $180 during his shift.

However, it wasn’t always like this for the 58-year old Inglewood resident.

“It wasn’t bad growing up in the city of Inglewood. I wasn’t born with a silver spoon in my mouth. I grew up on the avenues and you could say middle class back then. So, I grew up pretty decent,” Steward, explained to Inglewood Today.

Wearing a Dodgers windbreaker, he says that his mother was 15-years old when she began having children.

“She had my oldest brother at 15, she had me at 16 and my brother who died last month at 17. So my grandmother stepped in and raised us to the best of her ability. She didn’t smoke, drink or do nothing. My grandfather drank alcohol, but there was no weed smoking or anything in our house,” he explained.

That family foundation inspired Steward to obtain a job with the Inglewood Unified School District, he used to paint houses and also toiled at the local Burger King.

He says he uncle’s carpet shop on 64th and Normandie Ave. would also offer him work as needed.

Steward contributes joining street gangs while growing up as to what led him to a life of drugs and alcohol.

There is a common dominator among the challenges of the severe plight of homelessness and it is one that has also engulfed Steward.

“I used to smoke sherm, PCP and now I drink alcohol and smoke weed,” he confessed.

He says he has a 34-year old daughter who doesn’t speak to him anymore because he failed to attend her wedding.

“She graduated from Inglewood High, top 10, Northridge college and making big money. She has my grandson in private school. She’s doing her thing.”

He claims that he missed the wedding because he was arrested from being under the influence of alcohol, but on this day he appeared to be sober.

“I have a problem most definitely,” he admitted.

There was a time when Steward lived in an apartment on Doty Ave., but says even then he would always come to the location of this freeway off ramp, and eventually decided to bring what personal belongings he had and has been here ever since. According to his recollection that was more than 20 years ago.

“I used to come out here just to sit and get a peace of mind. We got shifts now, so I try to keep it organized. It’s very territorial and you have be from around here ( to solicit money).”

Stewart says that on a given night he could sleep anywhere.

“Living like this you can’t ride heavy. So I just have a couple of pants and shirts. The young people that are coming out here have too much stuff and that’s when the city comes around and takes it from them.”

He says the homeless population is getting younger by the day and identifies individuals as young as 19 camping out under the freeway.

“I try to tell them to go home. They are still in their prime, but more and more of them are out here.”


Steward says that the cost of living scares him.

When asked if he would be willing to do something to change his life, Steward said that he would.

What about alcohol and drug treatment?