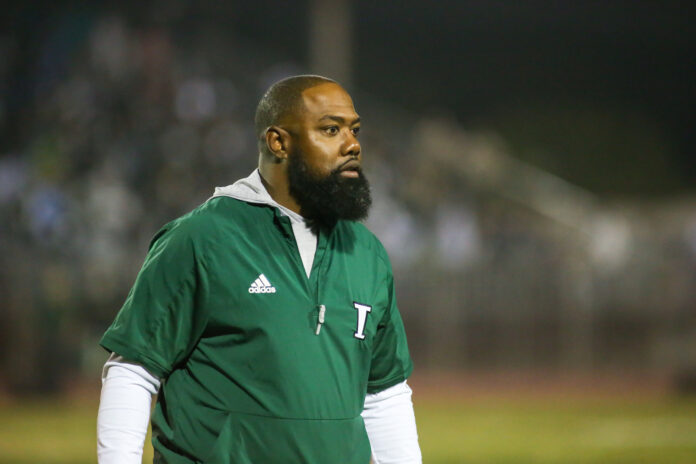 Three years ago, when Mil’Von Keishawn James was hired as the head football coach at Inglewood High School not a single soul noticed or even cared.

Some viewed James as a tarnished high school football coach, desperate for another opportunity, but those who really knew the real deal about what transpired at the Los Angeles Unified School District campus that he led from anonymity to prominence in the blinking of an eye felt he would perform a miracle at Inglewood.

James, a graduate of Los Angeles Fremont and former UCLA defensive back, is a person obsessed with the game of football, the opportunities that it offers Black urban youth facing severe life and death choices every day and is hell bent to do something about it.

I know James, perhaps a bit more than others who judge him by what he does as a football coach, and while he is desperately seeking to bring a CIF Southern Section football championship to ‘Da Wood’ he is equally motivated to help send as many kids to college as he can.

So, far so good for James at Inglewood where in just three seasons he has led the Sentinels to back-to-back semifinals and 26-2 record during that time span.

Most impressive is the number of players that he has developed into D-1 college recruits, 14 in three years and nine on his current team alone. Overall, 21 of his players have attended four year colleges or universities.

We know the numbers before James, really well. Zero and 10, anchored in hapless obscurity.

“I’m a natural builder. I took this job because I wanted to be part of something from the ground up, and this is not far from where I grew up. I like the city and the fact that this school is named for Inglewood,” James explained after an exhausting practice this week.

Inglewood returns just three starters on offense and defense, but is already off to a pretty good start, scoring a victory over last season’s playoff foe St. Bonaventure on its way to an early 2-0 record.

Led by ‘6’5, 250 pound All American tight end Jamari Johnson, a Louisville commit who has already scored two touchdowns and ‘6’1, 185 pound sophomore quarterback Husan Longstreet who has been off the charts with nine touchdowns in just two games and already has an offer from Florida State.

Arizona commit, safety Justin Johnson is another on the long and talented list of players that will be attending a Division 1 college next year.

“It’s been a challenge so far. For me it’s about our core discipline and playing fast, but we still need to execute,” James added.

As to what division the Sentinels will playing in the playoffs is anyone’s guess.

Last season they were jumped from division 13 to division 2, so there are no assurances where they might land.

“I don’t have a clue how that works? Don’t know where we will be slated, but I do know that we played our hearts out last year.

James still has a lot of work to do as he takes the Sentinels to Carlsbad for a game against a team that lost to the 2021 state champion.

His most glaring concern is depth, with just 35 players on the frosh/soph team and another 35 on the varsity roster there just isn’t enough bodies to go around.

However, James isn’t complaining, he is driven to keep building his ‘Miracle on Manchester’.

The LA Clippers are the Western Conference’s 8th-seed