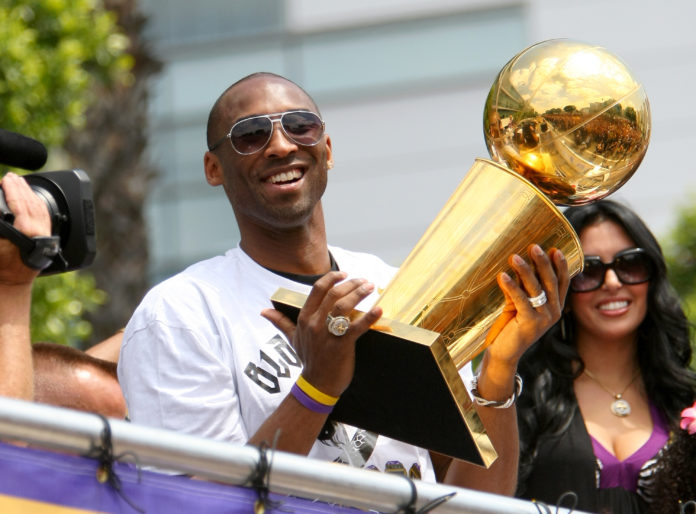 By Dave Smith, IT Columnist

While watching the 2/24 tribute to Kobe and Gianna Bryant, I thought about the first time I met him. It was 1996 and the 17-year-old prodigy had just been drafted by the Charlotte Hornets, traded to the Lakers and about to make his NBA Pro Summer League debut in the Pyramid at Cal St. Long Beach.

I was working in local radio at the time (KMAX 107.1 FM), saw Kobe sitting in the stands before the game and decided to approach him, tape recorder and microphone in hand, and ask him if he had a minute for an interview. He smiled and said “Sure. You know this is this first one I’ve done since I joined the Lakers.”

As the interview progressed and he expounded on his dreams of becoming the greatest player in NBA history and winning multiple NBA Championships, I was both impressed and embarrassed. Impressed at how a 17-year-old kid could be so mature, polished and intelligent; embarrassed that I was a grown man and not nearly as mature, polished and intelligent.

I’d read about off the charts intellect and maturity beyond his years, but sitting next to him and conversing, it was obvious the reports of his upper percentile SAT score and being fluent in three  languages were all true.

As we wrapped up the interview, a couple of people walked by and said something to him in Italian; and Kobe conversed with them fluently. Then a few fans in Lakers jerseys came by to say hello and get an autograph. Noticing they were Hispanic, Kobe spoke to them in Spanish and the look of surprise and awe on their faces was something I never forgot.

And I thought to myself, “Not only did this 17-year-old kid get a higher SAT score than me, he speaks  three languages fluently when I can barely speak one.”

Over the years I’d see him often in the Lakers locker room and when I briefly traveled with the team and covered them on road trips, he’d give me a wink and say “It’s the Sports God!” as we bumped fists.

He’d always poke fun at my clothes and my hair when I’d walk into the locker room and one time, after I’d just gotten a haircut, he looked at me and said “That’s just a shorter version of a disaster.” When the  laughter died down, he said “Hey, I can send you to my girl if you want to get a good haircut, I’ll give you her card.” When I accepted his offer, he said, “There’s one problem, though, she doesn’t cut white hair. But what the hell, what do you have to lose? It can’t be any worse than what you have now. Maybe you  should try an Afro.”

As his career progressed, I watched him accomplish a Three-Peat of World Championships before he turned 24, score an incredible 81 points in one game, become a perennial All Star, win MVPs, go through some tough times midway through his career after a feud and break-up with Shaquille O’Neal and then remarkably lead the Lakers to back-to-back championships in 2009 and 2010.

When Kobe, frustrated by the Lakers decline in the mid-2000’s and upset with management, demanded a trade, it seemed like his historic run with the Lakers was over. To then see him change his mind, remain a Laker and win two more championships just a few years later was nothing short of remarkable.

And while sitting inside Staples Center on April 13, 2016, watching Kobe score an incredible 60 points in his final NBA game, I thought back to the confident, mature, focused 17-year-old kid I’d interviewed 20 years ago. The kid who said he was going to be the greatest NBA player of all time, win multiple championships, win an MVP and be an ambassador for people all over the world.

I believed him on that night in 1996, and I’ll be damned if he didn’t deliver on almost everything he predicted.

Los Angeles Rams players’ causes take the field for ‘My Cause,...