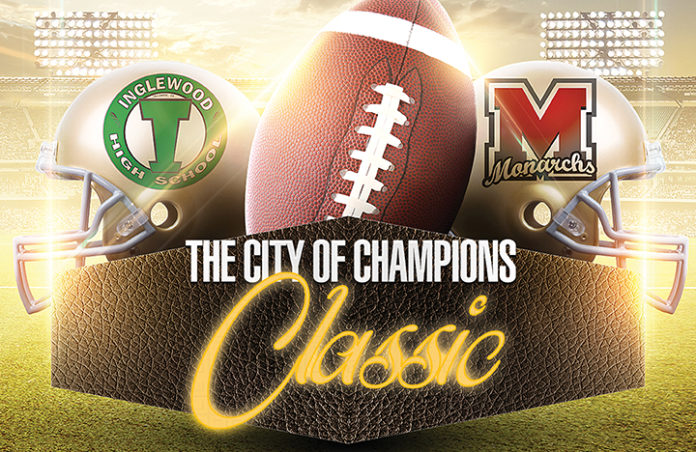 The City of Champions Classic, featuring local football teams Morningside and Inglewood, is expected to be the culmination of a season the Monarchs want to forget and the Sentinels want to remember.

For the Morningside Monarchs (1-8) it will be familiar song of wait until next year, but for the undefeated Inglewood Sentinels (9-0), the game Friday Nov. 1 at El Camino College marks the beginning of a long sought CIF-Southern Section title.

Inglewood, under the guidance of first year head coach Mil’Von James, has already secured its first Pioneer League championship since 2011, but aims to win its first ever CIF title.

James, who worked his magic at Hawkins when the school began its football program, has picked up right where he left off.

Led by the kid who was born and raised in Inglewood, Montana Lemonious-Craig, whom James credits with the resurgence of the program. Craig has all of the team’s 5 interceptions on defense, leads the team in scoring with 84 points on 14 touchdowns, in tackles and assist for a total of 45 on the season.

However, if this Inglewood team is to win a CIF title it will be a direct result of the splendid play of transfer quarterbacks Jared Heywood.

The 6’1, 191 pound senior has already received one scholarship offer from Rhode Island, but when the body of work is complete he could emerge in a power 5 conference.

Heywood has a 144 quarterback rating, completing 115 of 147 for 2,981 yards and 43 touchdowns (third best in the nation). He has only thrown 5 interceptions for a completion percentage of close to 80.

What makes Heywood so impressive is his accuracy and his decision-making, a pocket passer with the ability to escape pressure and still keep his eyes down field, a remarkable attribute for any high school quarterback.

As a team, Inglewood averages 327 yards passing per game, 266 rushing have scored 69 touchdowns and has shut out its last three opponents, 168-0.

Last week was the Sentinels stiffest test and they blanked North Torrance 28-0.

Morningside on the other hand has lost four consecutive games by a combined score of 189-19. Morningside’s only victory came on September 27 against Los Angeles, 18-14.

Since then it has been a ship anchored to the bottom of the ocean with all of its crewmembers lost and afloat.

It is difficult to pinpoint one area of most concern for coach Rod Harvey’s outfit, but those massive discrepancies will be magnified tenfold when they take the field against the Sentinels.

If there is a bright spot for the Monarchs it’s their players are young, but they lack size and depth, two ingredients the Sentinels have.

There will be no illusions of grandeur for the Monarchs here, they are arguably facing the best Inglewood team in the history of The City of Champions Classic.

A team capable of scoring 67 points before the band takes the field at halftime. Ah, yeah… it’s going to be that kind of party at El Co.

Critical Race Theory and the Whitewashing of America