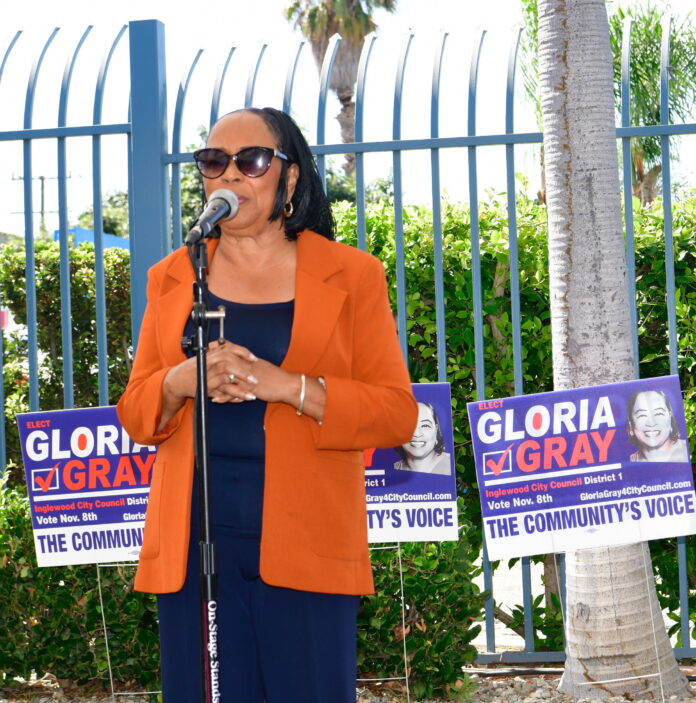 TO UNSEAT DOTSON IN THE FIRST DISTRICT

For over 34 years it has been my greatest honor to publish INGLEWOOD TODAY, the only adjudicated paper in the City of Inglewood. It has always been my aim to speak on behalf of the citizens and business owners of this great city, report news that affects all of us, and remain relevant in an environment that is targeted by social media.

Over the years I have developed personal and professional friendships with both candidates for the 1st District council seat and I have much respect for each of them as individuals. When it comes to city council representation however, I have must deliver my endorsement and cast my vote for the most qualified candidate, one who is independent, a polished and seasoned elected official, and one who will stand up and speak out, when it is necessary, against the demands of a very powerful mayor.

It is not a secret that Mayor Butts has an unusually strong influence over members over the city council, and collectively they have done much to invigorate the City of Inglewood. At the same time, Gloria Gray is not the mayor’s choice for this council seat but her independence will lend an objective viewpoint that George Dotson has failed to deliver.

During a recent council meeting the mayor asserted himself in answering a question directed to Dotson, when he was not able to present a clear, logical, convincing, or even an effective response. Also, during the mayor’s recent campaign kickoff, Dotson was present, and it was obvious that the mayor wants his supporters to also support Dotson, his hand-picked choice for the 1st District.

Reports have indicated that Dotson received a substantial loan from the mayor during his last election campaign. Butts is propping-up Dotson, who seems to have some health challenges, for re-election, so that it will serve his agenda going forward.

A Gloria Gray 1st district council member may not ensure Butts the unanimous council vote that he has enjoyed in the past, giving Inglewood voters the opportunity for their voices to be heard with the objective concerns of an independent council member that does not owe Butts any money. One that is free to challenge him and ensure a fair, impartial, public and broad review of the action the city may take that will affect all of Inglewood’s residents.

Gray was elected to the West Basin Municipal Water District (West Basin) Board of Directors in 2006 and has amassed an extensive list of progressively more responsible duties, responsibilities, and titles continuously since that time, from recognition from the Los Angeles County Board of Supervisors to the California Assembly, and an acknowledgment proclamation from the MWD Board of Directors in recognition of her service and outstanding leadership on the Delta Stewardship Council. She received the African Legacy Award as the first African American woman to be elected to the MWD Board of Directors and the Outstanding Community Honoree award from The A-Man, Inc. STEM International. She was inducted into the National Association of University Women’s Hall of Fame for exceptional leadership. She was honored in by the Southern California Water Committee with the “Honorable Harriett Wieder” award for leadership in water; Friends of the Sisters at the Well for her leadership in civic and public engagement; and the Friends of Ballona Wetlands for her leadership on current and future water supply issues.

Gray has commendations from former Los Angeles Mayor Antonio Villaraigosa, current Mayor Eric Garcetti and numerous elected officials. She is a union member of Service Employees International Union (SEIU) Local 721 for over 30 years. She earned her Bachelor of Science in Business Administration at the University of Redlands, and her Health Services Management Certificate from the University of California Los Angeles. Gray retired as a Health Care Administrator from the Los Angeles County Department of Health Services and is equipped and ready to bring her broad base of talent and Inglewood Community Commitment to the City of Inglewood!

Mayor Butts, keep your promise to the citizens of Inglewood, do what you must know is in the best interest for the city you have transformed. Join me and support Gloria Gray for the 1st Council District seat!

Opinion: We Must Stand Up for Justice in Mexico After the...