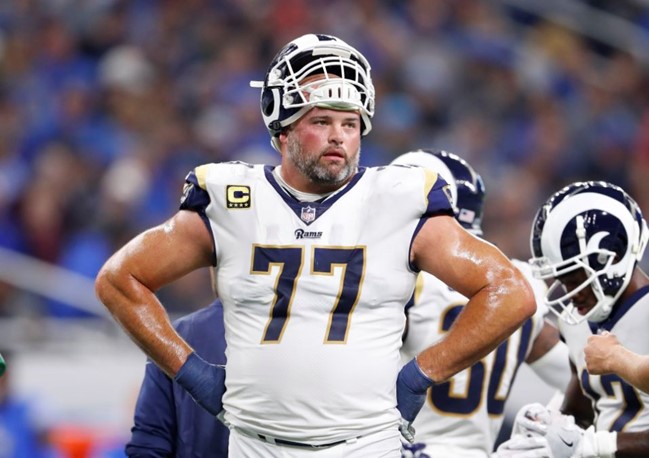 The Rams announced last week that Andrew Whitworth and his wife Melissa are donating $50,000 to help save Inglewood’s The Serving Spoon.

The Whitworths responded after The Serving Spoon’s owner Angela Johnson made a plea and a GoFundMe page seeking $75,000 to keep the doors open and the restaurant’s staff paid.

The iconic Serving Spoon Urban, Dine-In Eatery had continued to serve breakfast patrons, as they have for the last 37 years, despite the ongoing COVID-19 Pandemic that has crippled small businesses, especially restaurants, bars and cafes, throughout the region. Their ‘ain’t no better breakfast,’ slogan continues to satisfy local patrons as this writer observed over a dozen individuals waiting outside in the parking lot for their meal to be delivered.

Despite the recent court ruling that permitted Los Angeles area restaurants to continue to allow outside dining, The Serving Spoon had already removed their outside tables and chairs making take-out meals the only possibility. Familiar wait staff was observed hand carrying the bagged meals to the waiting patrons. Home delivery has not been established by the restaurant.

Among the dozen or so waiting patrons, one who appeared to be quite familiar with the restaurant and its operations suggested that. Like many other restaurants, The Serving Spoon is struggling to survive. She indicated that she heard about a recently posted ‘Go Fund Me’ page that had been established and had raised over $20.000 to help raise money to keep the restaurant open. The Whitworth’s generous donation will certainly allow the restaurant to endure during this Pandemic.

I have been eating my breakfast here for over 20 years she concluded and I am not interested in changing that pattern now. The Whitworth’s deserve special recognition from all of the patrons who have enjoyed the best breakfast in the City of Inglewood for over 37 years.

Crowns & Hops Brewing Co. Pays Homage to the People of...