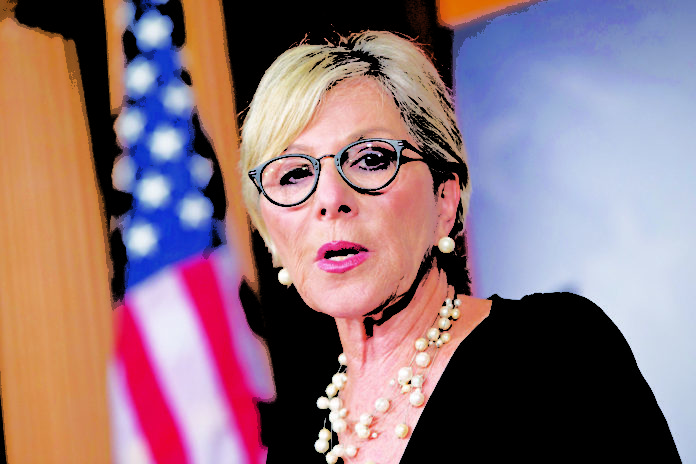 Is a friend truly a friend if she’s paid to hang out with you?

Let’s take a step back and reflect on this past Veteran’s Day when Inglewood resi-dents were treated to a doozy.  That day, the former senator appeared suddenly and out of nowhere in our fair city.

The reason: to participate in a rally against the proposed LA Clippers arena that was organized by D’artagnan Scorza’s Uplift Inglewood group. (Readers may recall that Uplift is funded in part by the Madison Square Garden Co., the johnny-come-lately owners of the Forum who have spent tens of millions to stall or kill the Clippers pro-ject because it will bring – gasp! – much-needed competition to the concert business.) Appearing before TV crews that were starving for “news” on a national holiday, Ms. Boxer expressed her deepest concern for the residents of Inglewood. Keep in mind, Ms. Boxer was joined by more reporters than supporters that day.

It seems she’s worried that we will experience a couple more years of inconvenience from a big construction project.  This would be the same former Sen. Barbara Boxer who absolutely no one can recall ever setting foot in Inglewood in her 24 years repre-senting the Great State of California in the United States Senate. Who knows — may-be she became familiar with Inglewood every time she flew over us to land at LAX and drive to a fancy fundraiser in Bel-Air or Beverly Hills.

Had the former senator actually done her homework instead of being spoon-fed a se-ries of bad “facts,” she would have learned that the California Air Resources Board did indeed require the Clippers project to meet the most stringent environmental reg-ulations ever placed on a sports facility being built in California. Which the Clippers, to their credit, readily agreed to.

Or that Clippers owner Steve Ballmer has pledged $100 million in financial and other assistance to help Inglewood residents who are struggling with rising home prices and rents. The money could have a dramatic positive impact on Inglewood.

Why did Ms. Boxer suddenly start showing up in our city? Telling us that good-paying jobs and economic opportunity were bad for us? Let’s look at the things that Ms. Boxer didn’t mention:

•             That the Clippers project promises more than 8,000 new jobs, an innovative traffic management plan, no new greenhouse gases and hundreds of brand-new units of affordable housing.

•             Or why she was really there. One of the key players in this drama is music promoter Irving Azoff, who has an ownership interest in the Forum and is a longtime donor to Boxer’s many campaigns.

Yes, paid, and please don’t pretend to be surprised or offended by that suggestion. That’s what former politicians like Ms. Boxer are — hired guns.

Ms. Boxer showed her true colors this week when she announced she had found a new job as co-chair of Mercury Public Affairs, the heavyweight Sacramento-based lobbying and consulting firm that is home to many former politicians who can’t find real work in today’s growing economy.

There are three really important things to know about Mercury Public Affairs.

One: They are hired to work for Madison Square Garden to oppose the LA Clippers arena. Is it a coincidence that Ms. Boxer has been popping up in Inglewood to oppose the same project?

Two: Mercury’s client roster is the Who’s Who of Bad Characters. They represent the foreign governments of Qatar and Turkey. They represent big corporations like AT&T and Airbnb. They work for people who have a lot of money and spend it to make sure that the laws that “regulate” their industries work in their favor.

Three: Mercury is effectively a retirement community for politicians who leave office. And Ms. Boxer will have some colorful new colleagues there, including a former U.S. Senator who admitted to hiring prostitutes and a pollster for President Trump who was questioned by Special Counsel Robert Mueller. Yikes.

Hopefully, the new gig means that Inglewood won’t see the likes of Ms. Boxer for an-other 24 years. We certainly don’t need her here telling us what is good or bad for our community. We’re more than capable of thinking for ourselves. But if we do see her here, given her new line of work, we should be a lot more suspicious about her and her motivations.

And now you can’t say that we didn’t warn you.

How do you feel about Trump’s infamous “Go Back” comment?