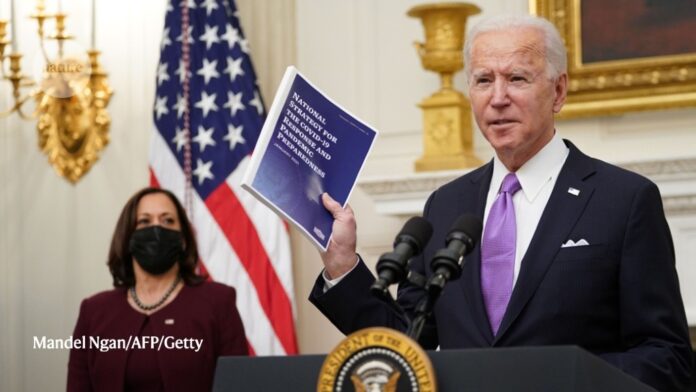 The Biden administration remains hopeful while still embracing the likelihood of omicron in the United States.

Among the actions are plans to distribute 500 million free at-home rapid COVID-19 tests beginning in January, which the White House called another attempt to double down on the spread of the new variant.

According to health officials, Omicron now accounts for about 75 percent of all cases.

The President’s announcement builds on the robust plan he announced earlier this month to get people maximum protection ahead of the winter and prepare for rising cases driven by the new variant.

“We know how to protect people from severe illness, we have the tools needed to do it, and thanks to the President’s Winter Plan, already 73 percent of adult Americans are fully vaccinated – up less than 1 percent before the President took office – and we are getting about 1 million booster shots in arms each day,” The White House said in a Fact Sheet.

Vaccines are free and readily available at 90,000 convenient locations, and there’s clear guidance on masking and other measures that help slow the spread of COVID-19, officials stated.

“Our vaccines are the most powerful tools we have – they work to protect people from serious illness and death, and boosters provide people optimal protection,” administration officials remarked.

“[The President’s] actions will mitigate the impact unvaccinated individuals have on our health care system, while increasing access to free testing and getting more shots in arms to keep people safe and our schools and economy open.”

• Included in the President’s actions are:

• Mobilizing an Additional 1,000 Troops to Deploy to COVID-Burdened Hospitals.

• Expanding Capacity to Get Shots in Arms.