People who the state of California had a hand in forcing or coercing to undergo vasectomies or get their tubes tied are now eligible for compensation. The payments will come from a $7.5 million state fund.

Some of those victims, both men and women, were sterilizedwithout their consent or knowledge.

“California is committed to confronting this dark chapter in the state’s past and addressing the impacts of this shameful history still being felt by Californians today,” said Gov. Newsom last week when he announced the program which began Jan 1 and is included as a line item in the state’s 2021-22 budget.

The Governor’s office estimates that there about 600 survivors, eligible and alive, who underwent the now-illegal method of birth control either at state medical facilities or in prison.

The survivors have until Dec. 31, 2023 to apply for compensation. $4.5 million of the fund will be used for payments evenly divided among people who apply and are approved. Each will receive a check for an amount up to $25,000 dollars.

Another $2 million will be used for public information campaigns promoting the program. $1 million will be used to create and install commemorative plaques at locations where “the wrongful sterilization of thousands of vulnerable people” happened, according to the Governor’s office.

Last year, Assemblymember Wendy Carrillo (D-Los Angeles) wrote and introduced Assembly Bill (AB) 1007 that proposed the program and served as the basis for funding the policy, which was included in the state budget after negotiations with legislative leaders.

Carillo said the launch of the program represents a victory that “comes to fruition after decades of advocacy.” She also highlighted the fact most of the victims were low-income, living with disabilities, or were people of color.

“We often discuss a woman’s right to choose, which includes the choice of becoming a mother, to become a parent. California’s eugenics laws have taken that away from many people,” said Carillo. “This is only the first step in addressing this wrong.”

She was referring to the practice, legal in California, that authorized state-run healthcare facilities to sterilize people that they considered “unfit for reproduction.”

“The compensation finally admits that California was in violation of human rights and reproductive justice. As a state, we must and can do more to recognize the horrific impact of eugenic sterilization programs on California families, and the devastating consequences of this failed attempt to eradicate populations.”

California’s sterilization law remained in effect from 1909, when the Assembly approved it, until 1979 when it was overturned. During that period, an estimated 20,000 people were sterilized.

In 2003, Gov. Gray Davis issued an apology to survivors.

“California led the way in eugenics as legislation was copied across the United States and used as a model for Adolf Hitler throughout World War II,” according to a statement Carillo’s office released.

State-sponsored sterilizations, however, continued in California prisons at least until 2010, according to the State Auditor’s office. That policy was banned in 2014.

Survivors can apply for payments through California’s Forced or Involuntary Sterilization Compensation Program, according to Gov Newsom’s office.The California Victim Compensation Board is responsible for administering the program.

The board says the identities of applicants will be kept confidential and payments will not impact a claimant’s trust, or Medicaid or Social Security status or benefits. The state will also not consider compensation survivors receive as income for state tax or child support purposes.

Gov. Newsom said the program is part of a broader state initiative to redress historical injustices.

“While we can never fully make amends for what they’ve endured, the state will do all it can to ensure survivors of wrongful sterilization receive compensation,” the governor said. 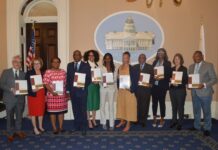