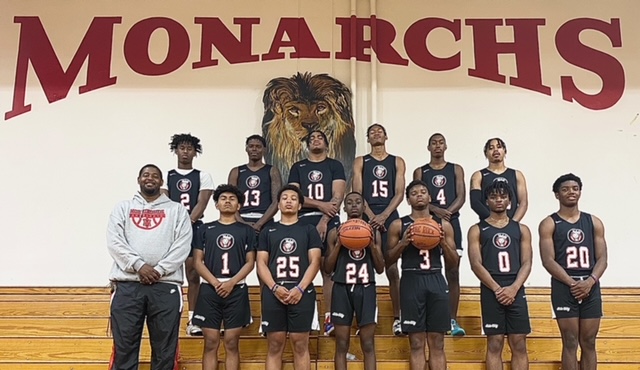 First year head coach Omar Bray of the Inglewood Sentinels is off to an uneven beginning, but Bray had openly expressed that rebuilding the program was going to take some time.

The Sentinels were 3-3 at press time, with two blowout loses to powerful Beverly Hills and one nail biter to rival Morningside 75-73 at home.

Inglewood will play at Leuzinger on May 14, a team that it owns a win against and host hapless Hawthorne on May 18.

Meanwhile, Morningside head coach Donnell Meekins has continued to improve the Monarchs after their pre Covid playoff bound success in 2020.

After finishing third in league a year ago the hopes for Meekins and his bunch which returned 8 players was to contend for a league title.

“We had a lot of hope coming into this season, but with COVID-19 restrictions it has just been so much more difficult,” Meekins explained to Inglewood Today. “I had plays to taking my teams to university camps so that they could show their skills. However, we still play on contending for a championship.”

The Monarchs began the week 4-2 with a victory in the holster over Inglewood and played Beverly Hills much more competitively losing 58-35.

The teams are allowed two fans per play during the COVID-1`9 restrictions and Meekins says that it has made a big difference.

Meekins squad will play host to Beverly Hills on May 14 and then Centennial on May 18.

Meanwhile on the girl’s circuit; Inglewood began the week 1-5 with its lone victory over Morningside and Morningside was 1-3 with just six players. The Lady Monarchs only win came against Hawthorne 39-29. Inglewood girls will play at  first place Leuzinger on May 14 and host Hawthorne on May 18, while Morningside will be at home on May 15 and May 18 against Beverly Hills and Compton Centennial, respectively.