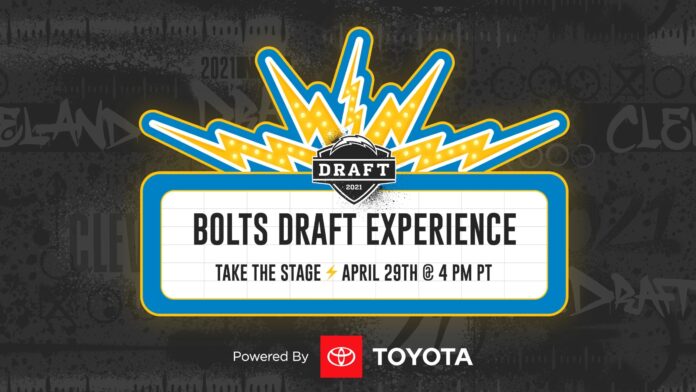 The Los Angeles Chargers will host a live-stream draft ‘pregame’ show for fans as a lead-in to the Thursday, April 29 national television broadcast of the 2021 NFL Draft. The Bolts Draft Experience powered by Southern California Toyota Dealers will be broadcast on the Chargers Official App starting at 4:00pm PT and run right up until the First Round of the 2021 NFL Draft kicks off at 5:00pm PT.

Chargers’ Spanish Radio analyst Francisco Pinto and team reporter Chris Hayre will serve as co-hosts of the digital broadcast event while Chargers’ team reporter Hayley Elwood will cut in live from Cleveland, site of the 2021 NFL Draft, throughout the show to provide fans with up-to-the-minute news leading up to the first pick.

With several prizes and giveaways – including autographed memorabilia – being handed out during the event, fans simply need to download the Chargers Official App and create a profile to get in on the fun. Once registered, fans can also begin submitting their NFL Draft predictions which automatically enter them into a contest awarding points for each correct prediction. The individuals with the top three point totals will win the following prizes:

The Future is Here!

2021 Season Ticket Memberships are starting at only $50 per game. Click here to learn more.

The Mighty NFL Doesn’t Care What You Think Chargers Lynn is...