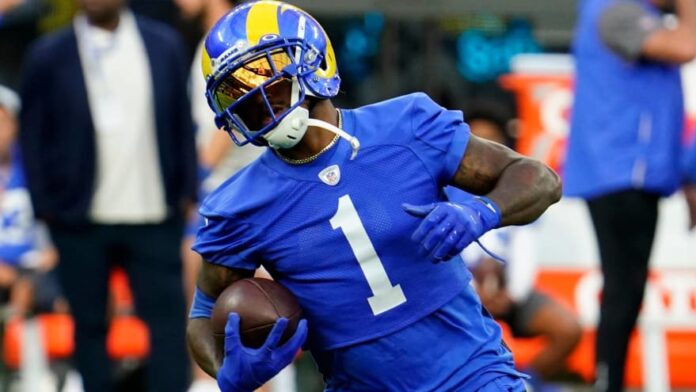 With the offseason program complete and training camp on the horizon, it’s time to look ahead. As part of the preparation for training camp, theRams.com will be spotlighting a handful of players new to the Rams’ roster. Kicking off the series is wide receiver DeSean Jackson.
How He Got Here: Jackson was available this offseason after being released by the Philadelphia Eagles on Feb. 19. A little over a month later, he agreed to terms with the Rams on a one-year deal. The signing reunited him with Rams head coach Sean McVay, who was his offensive coordinator for three seasons in Washington (2014-16) and oversaw a span in which Jackson posted the second-highest (20.9, 2014) and fourth-highest (17.9, 2016) single-season yards per reception averages of his career.
What’s Next: Reconnecting with McVay, Jackson will be tasked with filling a similar role to his first stint. McVay previously mentioned creating more explosive plays being a priority this year, and Jackson’s speed and big-play ability will play an important part in that. It’s also possible Jackson could be used in other ways. Jackson landed in a Los Angeles offense with established, returning targets for quarterback Matthew Stafford – similar to his arrival in Washington seven years ago – but McVay still found other ways to capitalize on Jackson’s skillset beyond just his niche “deep threat” role back then. On June 9, Stafford said Jackson “still has the long speed” and “plays a little bit bigger than people give him credit for.”
Bet You Didn’t Know: Though many may recognize Jackson from his college playing days at Cal, his roots go deeper than that. He grew up in the Crenshaw neighborhood of Los Angeles – even playing football in a park near what is now the site for SoFi Stadium – before starring at Long Beach Polytechnic High School. He was also a producer of All Eyez on Me, a 2017 biopic on rapper and activist Tupac Shakur.
Quotable: “Just getting the relationships down with my teammates, Rob (Robert Woods), Coop (Cooper Kupp), guys like that and seeing how we’re going to work together, it’s definitely going to be a scary group for defenses and defenders, because Sean McVay, one thing about him is he’s going to figure out how to get people open. So we’re just looking forward to having a lot of fun doing it.” – DeSean Jackson on June 8