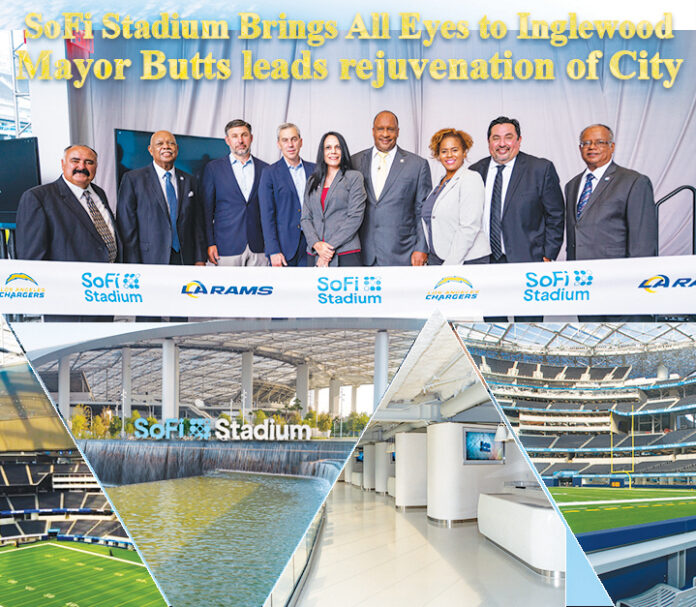 Approximately 25-years and three months to that day the City of Inglewood was to become home to the Raiders and Rams, Inglewood now stands on the cusp of becoming the sports and entertainment capitol of the world.

The memory is still vivid when Hollywood Park publicist Jack Disney had informed me in confidence that a deal between Hollywood Park and Raiders owner Al Davis had died on the date it was to be announced.

Bottom line was, the late Al Davis didn’t want to share a new stadium with the neighboring Rams who had been playing in Orange County.

Inglewood had already been promised two Super Bowls and the whole nine, but what Inglewood didn’t have 25-years ago was Rams owner E. Stanley Kroenke and forward thinking Inglewood Mayor James T. Butts.

Unlike Davis 25 years, Kroenke was willing bankroll the project, but it wasn’t going to be just any stadium, it was going to be something that would blow the lid off the world, and it has done just that.

The savvy Butts, while intrigued by the possibility of rejuvenation of Inglewood, which had been plagued by high unemployment, crime and the decaying Hollywood Park racetrack, he was not going to mortgage the future of the city to get it done.

Mayor Butts who shrank unemployment in Inglewood from more than 17 percent to a record low of 4.7 percent, met Kroenke in 2013 in what was supposed to be a 15-minute meeting at City Hall that stretched out to more than two hours.

A Citizen Initiative was created and more than 22,000 signatures collected. The City Council could have decided to place the measure on the ballot or sign it into law, but instead approved it into law.

Three years later in 2016, the NFL votes to approve the Rams relocating to the Southern California region and also approved the Chargers to move from San Diego to the where it was born in Los Angeles in 1960.

Now, Inglewood a city where the Ku Klux Klan ran rampant from 1922-1937, that birthed and nourished Hollywood Park for 75 years, opened the Forum in 1967 and housed the Lakers and Kings until 1999 is on an orbit of its own.

SoFi Stadium is the most significant architectural achievement in the history of the world, it dwarfs the evolution of The Rose Bowl, Coliseum and another local venue.

During a virtual ribbon-cutting ceremony this week at SoFi Stadium, marking the start of its inaugural year. The ceremony included Rams Owner/Chairman and SoFi Stadium and Hollywood Park developer Kroenke, Chargers Owner/Chairman Dean Spanos and the City of Inglewood’s Mayor James T. Butts, with a video message from NFL Commissioner Roger Goodell. Inglewood resident and NFL Network’s Steve Wyche as master of ceremonies

“We are in the team business, and you can’t get to a moment like today without a great team. I would like to thank the 17,000 people who have worked on this project over the past four years,” said Rams Owner/Chairman Stan Kroenke. “During a period of unrest and change in many parts of the country, it’s been our deepest privilege to work on a project this special with such a diverse workforce. Thank you for making our vision a reality.”

Located in the entertainment capital of the world, SoFi Stadium is the first football stadium to be built within Los Angeles in nearly 100 years. The state-of-the-art venue includes many firsts across industries, including in architecture, construction, engineering, technology and more. It is the largest stadium in the NFL at 3.1 million square feet, and the first open-air, indoor-outdoor venue to be built. This structural marvel will usher in a new era of sports, entertainment, and football in Southern California.

“When you see our SoFi Stadium home and the ongoing development surrounding it, you have to marvel at Stan Kroenke’s vision,” said Los Angeles Chargers Owner and Chairman of the Board Dean Spanos. “This is an iconic project, anchored by an iconic stadium, that will not only redefine the City of Inglewood, it will redefine the landscape of greater Los Angeles for the next century and beyond. This has been a long time coming, and we cannot wait to usher in a new era of Chargers football on what will undoubtedly be the grandest stage in all of sports.”

SoFi Stadium can host approximately 70,000 fans, expandable up to 100,000 for special events. A stadium built to be fan-first, it has more than 260 suites, seven suite concepts, 12 club spaces, and more than 13,000 premium seats all designed to cater to convenience and extraordinary fan experiences. An all-digital venue, SoFi Stadium has 90,000 square feet of digital LED in the seating bowl alone, 70,000 of which makes up the largest videoboard in sports. A completely unique design, SoFi Stadium’s videoboard is the first of its kind and the only 4k end-to-end videoboard in sports.

In addition to 20 NFL home games a year, SoFi Stadium will host a variety of events throughout the year and is already the home of LA Bowl, Taylor Swift’s Lover Fest West in 2021, WrestleMania in 2021, Kenny Chesney’s Chillaxification Tour in 2021, Mötley Crüe and Def Leppard’s The Stadium Tour in 2021, Super Bowl LVI in 2022, the College Football National Championship game in 2023, and the Opening and Closing Ceremonies of the 2028 Olympic Games.

SoFi Stadium is the centerpiece of Hollywood Park, a near 300-acre sports and entertainment destination being developed by Kroenke. It is the largest mixed-use development under construction in the Western United States, and with more than 25 acres of public parks and open space, Hollywood Park is designed to be a true community gathering space for Inglewood, greater Los Angeles, and the world. Entirely privately funded, Hollywood Park, when complete, will offer up to 5 million square feet of creative office space, an exceptional 500,000-square-foot retail district, up to 3,000 residences, and a hotel.