In celebration of Black History Month, TidalWave Comics is proud to announce three new graphic novel collections featuring black politicians, musicians, and athletes at the top of their fields.

Every February for the last twelve years of producing biography comic books, we celebrate Black History Month to show our respect for the black communities work and sacrifices. No stranger to honoring those who shape our politics and culture, TidalWave has profiled politicians, musicians, actors, and others for more than eleven years using graphic narrative’s unique storytelling properties.

The merging of compelling text with eye-popping art appeals to people of all ages, something that’s important to publisher Darren G. Davis.

“I was a reluctant reader as a kid,” said Davis. “But comic books drew me in. There’s something magical about the combination of words and pictures working together that appealed to me.”

That appeal is something adults, and kids enjoy. “Comics like this are collectible memorabilia,” said Davis, “but we also want them to be a great read about the people who are shaping our country’s politics and culture.”

The graphic novel collections explore the lives of real people who achieved fame and are considered at the top of their chosen fields.

“What I love about working with TidalWave is that we focus on the real lives of our subjects. We don’t get mired down in conjecture. We strive for unbiased storytelling. Don’t think of this as a political book. Think of it as a profile of people who are influential in our political system.” Said writer Michael Frizell, whose work is featured in the section on Vice President Kamala Harris.

Chosen for their undeniable influence on the music scene, the second collection, “Black History Leaders: Music: Beyonce, Drake, Nikki Minaj, and Prince,” looks at leadership’s creative side. This collection is set for release on February 17.

“As a kid, I couldn’t get enough of Prince’s music,” said writer Frizell. “Sure, Michael Jackson sold more copies during that time, but Prince changed the way we listen to music. His combination of funk and rock was infectious. It was his innuendo-laden lyrics that got me in trouble with my parents as a kid.”

And finally, on February 24, “Black History Leaders: Athletes: LeBron James, Jackie Robinson, Russell Wilson, and Tiger Woods” explores the lives of people who pushed themselves to their physical limits and led their respective sports to fame. The cover was drawn by famed comic book artist Joe Phillips.

The biography comic format allows TidalWave writers to delve into newsworthy figures’ history and explore what shaped them. Several media outlets, including CNN, FOX News, “The Today Show,” and Time and People magazines, have featured the company’s line of biographical comic books.

The “Female Force: Oprah Winfrey” comic book is displayed in the Smithsonian Museum.  Our titles also can be seen as part of the “Black History 101: Mobile Museum”.

Print copies of the comics are available on Amazon. Digital versions are available from iTunes, Kindle, Nook, ComiXology, Kobo, and wherever e-books are sold.

82-year old losing her Inglewood home for $38,000 Marie Riggins was the first to buy in Carlton Square 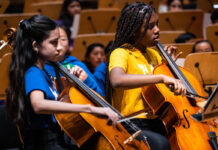 LA Phil’s YOLA Center has arrived in Inglewood¬. This will be formative for the prosperity of our community’s young artists.

‘Inglewood’s Helping Hands’ Founder Kaitlyn Parhm is for the people