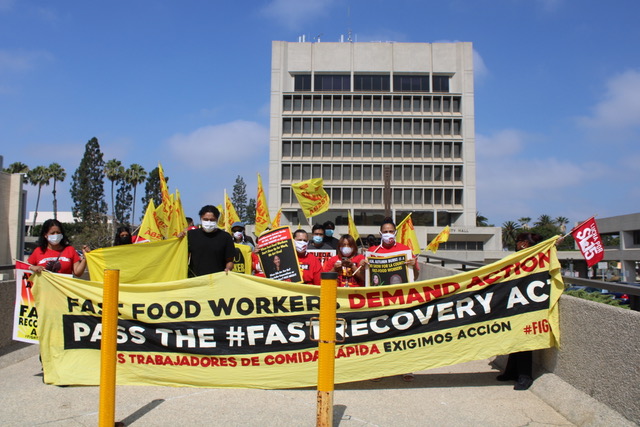 AB-257, introduced by Assembly Member Lorena Gonzalez in January 2021, would create a Fast-Food Sector Council, an 11-member board with representatives appointed by the governor and legislative leaders, each for four-year terms. The council would establish industry-wide minimum standards on wages, working hours, and other working conditions related to the health, safety, and welfare of fast-food restaurant workers. The bill would also supply the necessary cost of proper living to workers.

After Assembly Member Autumn Burke chose to abstain from voting on the bill, the workers deemed it vital to hold the rally outside of Assembly Member Burke’s office at Inglewood City Hall.

Nearly half a million fast-food workers reside in California, and even as the state’s economy is on a path toward recovery, these workers remain in crisis, and the issues at hand have been relevant since before the pandemic.

Issues include violence on the job, sexual harassment, wage theft, and health and safety concerns. Most recently, as the heat wave across California intensifies, there’s been an increasing number of fast-food workers’ complaints citing extreme heat and inadequate or broken air conditioning in stores.

Mysheka Ronquillo has been an employee at Carl’s Jr. for five years, and she’s also a home healthcare worker. Ronquillo spoke at the rally about some of the traumatic experiences she’s faced while working at Carl’s Jr., and the lack of protection that she had during these experiences. The FAST Recovery Act would make all of the difference for Ronquillo and her co-workers.

“AB-257 will basically hold large corporations of fast-food accountable for everything that goes on in the workplace. It would give us a voice. We would get paid a decent wage. It would protect us. There were times where I was at work and I would be abused by customers, and they would just tell me to keep working. People put their hands on me, and I’m just told to keep working. That’s not fair, and no one’s held accountable for that. With AB-257, we’ll have a council made up of people that are also on our side. They’ll enact laws so that we’re protected at work, so that we don’t feel like we’re scared to speak up because we’re afraid of getting fired,” says Ronquillo.

The push for AB-257 didn’t end here. Approximately two hours after the Inglewood rally, Compton was the next destination, outside of Assembly Member Mike Gipson’s district office–who also abstained from voting on the bill.

Resting is the best medicine for 104 year old Rosezell Roney...

One Year After George Floyd: America and the Police