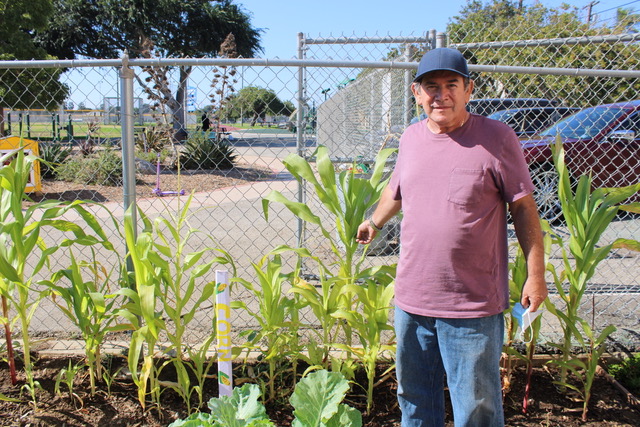 In January 2021, Inglewood native Pedro Venegas began tending to his neighbor’s tangerine tree. They were tasty tangerines and Venegas couldn’t stand the thought of them going to waste. Once the tangerines reached their full potential on the tree, he would pick them and take them to downtown Inglewood on Market Street, where a donation drive was regularly held at the time.

Donations were brought in daily from people all over Los Angeles– items such as food, books, toys, and clothes. And as Venegas began to regularly bring the tangerines, his giving spirit also compelled him to help upkeep the donation area. He noticed when food would sit there for too long, and would clean out the items that could no longer be of use. He’d also organize and keep the space as clean as possible.

Eventually, the donation box was shut down due to lack of upkeep. Afterall, Pedro Venegas is only one person. Perhaps the space needed just a couple more Pedro Venegases to help maintain the area. But for the time that this donation drive did last, it helped many people.

With all of that being said, the tangerine tree turned out to be the origin story of Venegas’ green thumb.

After the shutdown of Market Street’s donation drive, Venegas craved a new project. He soon stumbled upon the new community garden that had recently launched at Inglewood’s Darby Park, ‘The Dobby Garden’. Venegas saw the potential and how much work there was to be done at the new Darby Park addition. Garden Director Eva Penuelas asked if he’d like to help with some of the weekly tasks in the garden.

“A month later, it looked better. Two months later, it was starting to come together. I had asked Eva to tell me the days she would be [at the garden], and I’d come and help on those days. I didn’t know anything about gardening, but it’s food that people could actually use. Now that people are actually showing up with their bags to pick up food– that’s what I was waiting for,” says Venegas.

Now, as for day-to-day activities as the garden continues to blossom, Venegas helps keep the fruits and vegetables hydrated and healthy. He’s always willing to get his hands dirty whenever necessary, and he’s always ready to educate any curious kid or adult that stumbles into The Dobby Garden with questions. Afterall, not long ago, he was the one who stumbled into the garden with the same questions and curiosities.

Keeping The Dobby Garden thriving is just one of Pedro Venegas’ talents and interests. During his free time, you can also find him playing pool at the Inglewood Senior Center.
“The thing that I like the most, and what I’m trying to do for my own self, is make my community my home. Anything that I like to do, if I can do it in Inglewood, I want to do it in Inglewood. The more people that have that mentality, it can affect the community,” says Venegas.

His answer when asked what The Dobby Garden is in need of in order to continue to grow and reach its full potential, “a few more people to get involved.”

Consider that a call to action!

Commentary: Together, We Should Seek Justice for the Tulsa Massacre 100...