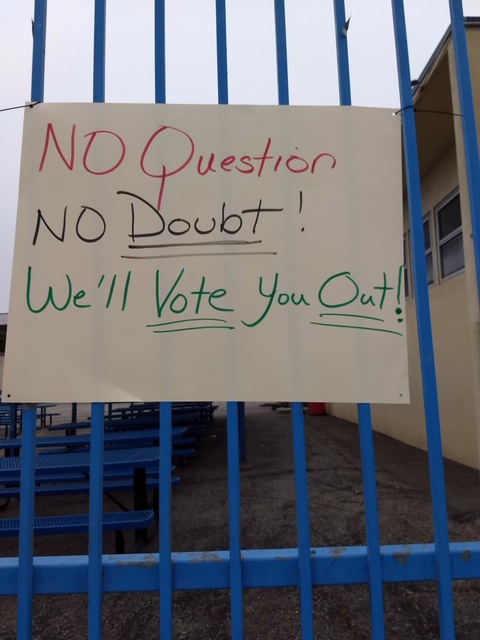 More than a month ago Inglewood Today published a front-page article detailing the closure of Warren Lane/Daniel Freeman Middle School.

We were very critical of the Inglewood Unified School District (IUSD) and its board members of which three are up for reelection in November.

What was missing from that article was the power and influence of the parents who were vehemently protesting the closing of the predominantly Black student school.

They held one of the protest on the City Hall lawn that was attended by Mayor James T. Butts, but their gathering did not appear to attract any attention, especially that of the individuals responsible for closing the school.

Marian Coffield was one of the leading parents that steadfastly continued to advocate keeping Warren Lane open.

Coffield is a longtime Inglewood resident and her 8-year old son Kaj is a student at Warren Lane.

“Warren Lane was not my first choice, but it didn’t make sense to go far away,” she explained to Inglewood Today as the reason for sending her son to the school.

She was impressed with the curriculum at Warren Lane. The first year her son was exposed to arts, dancing, singing and sports, but in the second year all programs had evaporated except for music.

“There were a lot of things that happened very quickly,” she said. “(During board meetings) people were allowed to speak but their comments were not addressed.”

Matters escalated from bad to worse when the COVID-19 pandemic forced meetings to be held virtual while offices were closed.

“It was as if they were (IUSD and administrators) were running things as they saw fit,” Coffield added.

She argued there was a lack of transparency, something that other since closed schools complained about.

IUSD was more focused on escaping the mountain of debt and removing the district out of state receivership instead of providing the students with a quality education.

As student test scores plummeted the individuals responsible at the district and administration level were delinquent.

One board member who oversees Warren Lane commented that she did not know that the community around the school was so beautiful.

Coffield’s persistence and that of over 100 other parents of students at Warren Lane prevailed in forcing the district to reverse its decision to close the school and instead will keep it open for at least one year.

“The big problem at this point is the community does not have a commitment from Dr. Erika Torres beyond one year,” she stated.

During a meeting with Torres, the state appointed administrator who supervises the district, she was able to obtain a lower student contingency than the previous 300 that was required to keep the school open. The requirement now is for adding 50 students, a number easily achievable, especially with the forced closure of charters Today’s Fresh Start and Century Academy For Excellence.

“We want Warren Lane mentioned in the bond language. We want a commitment from the district that this school is not going to be closed in June 2021 and that Warren Lane/Daniel Freeman will be in position to get the facilities upgrades as other schools in the district have,” she stated in a letter to the district obtained by Inglewood Today.

That Coffield has managed to do what no public official said could be done (the mayor remained neutral) demonstrates the power that parents wield when exercised. She is not going anywhere, in fact it appears t