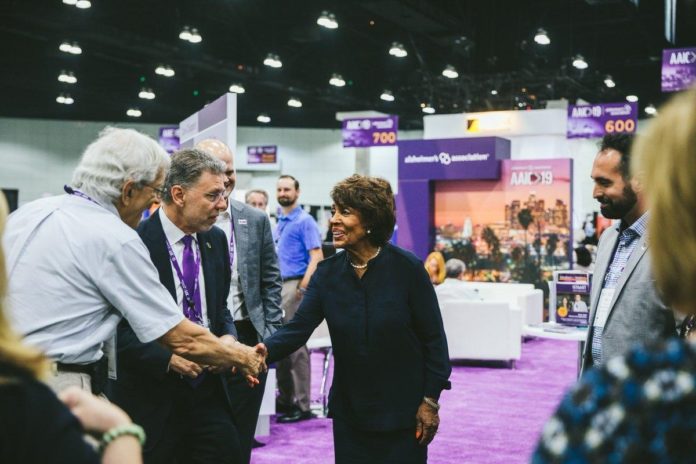 This week, thousands of researchers, scientists, clinicians, advocates, and concerned Angelenos convened at the Los Angeles Convention Center to discuss one of the most urgent health crises of our time: eradicating Alzheimer’s disease and all forms of dementia.

Each year, the Annual Alzheimer’s International Conference (AAIC), serves as the world’s largest week-long summit that is dedicated to discussing the latest scientific breakthroughs and innovation that will improve our ability to detect, treat, and ultimately, find a cure for Alzheimer’s disease. As I walked the halls of the AAIC, I was so pleased to learn about scientific advancements, such as the possibility of a new test to determine an individual’s risk of developing Alzheimer’s and new research suggesting that healthy lifestyle choices – including a healthy diet, exercise, and cognitive stimulation – can significantly reduce the risk of dementia. These breakthroughs will save lives and help us advance our mission of stopping Alzheimer’s disease in its dangerous tracks.

As the Co-Chair of the bipartisan Congressional Task Force on Alzheimer’s Disease, I have been engaged in this fight for many years and know all too well how devastating this disease can be for patients, families, and caregivers. There is currently no effective treatment, no means of prevention, and no method for slowing the progression of the Alzheimer’s disease, which affects 670,000 people over the age of 65 in California alone.[1] More than 5.6 million Americans are living with Alzheimer’s, and by the year 2050 that number will have more than doubled.[2]

I led a years-long effort in the House to create the first ever Alzheimer’s semipostal fundraising stamp, which was formally accepted by the U.S. Postal Service in November 2017. The stamp has already raised $915,000 for Alzheimer’s, and more than 6.7 million stamps have been sold.[3] I am also proud to have joined with my colleagues to increase funding for Alzheimer’s research at the National Institutes of Health to a historic total of $2.3 billion in fiscal year 2019. Moreover, when I called for an additional $350 million in 2020, 129 of my congressional colleagues, representing both political parties, supported my request.  While meeting with scientists at the AAIC, I was especially gratified to see that the increases in research funding for which I have fought so hard are being put to good use.

However, research – while critical – is not enough. As we search for a cure for Alzheimer’s, we must simultaneously pursue commonsense measures that support caregivers and ensure that patients have access to the resources and funding they need to fight this tragic disease.

For the past decade, I have also led efforts in Congress to expand funding for the Missing Alzheimer’s Patient Alert Program, which helps local law enforcement officials find persons with Alzheimer’s who wander and reunite them with their families. Congress also passed the BOLD Infrastructure for Alzheimer’s Act, which provides for the development of a robust Alzheimer’s public health infrastructure across the country by establishing Alzheimer’s Centers of Excellence. The BOLD Act’s interventions will support early detection and diagnosis, reduce the risk of hospitalizations and cognitive decline, support caregivers, and reduce health disparities – but only if the law is fully funded – and Congress has yet to provide the funding.

Confronting the many challenges of Alzheimer’s disease requires a comprehensive approach. I am pleased that Congress is beginning to take this issue seriously, but it is past time for all legislative bodies, at the state, local, and federal level, to join in this fight. As a country and a global society, we must approach Alzheimer’s disease with the urgency it deserves. Our futures and those of our loved ones are depending upon it.