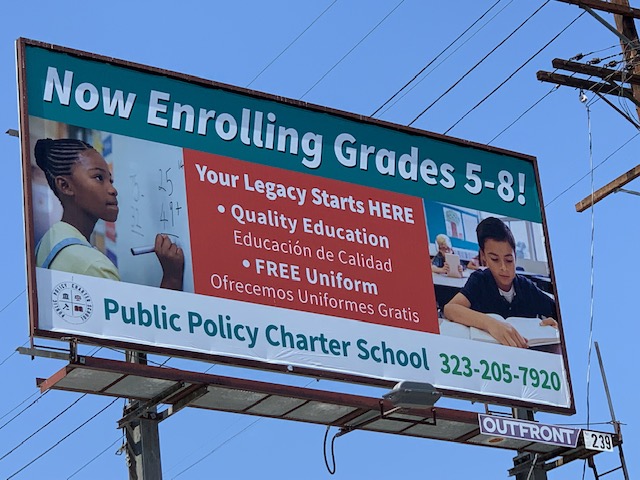 If you keep driving north on Western Ave. you can easily miss it. If you move to fast going south you can’t see it.

To the left is the famous Jacks breakfast spot and right across the street is another popular eatery.

I didn’t even notice the sign until it was point out by its incoming Executive Director, Frank Williams.

“In a zip code, 90062, where there is a dearth of opportunity and many times an absence of hope, I am trying to change the trajectory of the prospects for the youth future. Here 40% of adults only have a high school diploma and 47% only have a school diploma. I am trying to send 1005 to college completion. That’s revolutionary, uncontroversial, and to so many unrealistic. But also possible,” stated Williams.

Williams is very familiar with charter schools and before our interview started spurting out the facts.

“Charter schools are about 20 years old and came into existence so that parents and children could choose where they go to school. When you went to school you went based on your area code, but this (charter schools) was supposed to provide choice,” Williams explained. “You can live in Texas and go to Public Policy Charter School, it has nothing to do with residency.”

He went on to detail that charter schools were designed to cater to the specific needs of children.

Charter’s have to apply with local school district and in this instance Los Angeles Unified School District and must offer an element of education that district schools do not provide such as character education at TEACH.

After spending time as a criminal defense lawyer, Williams cut his teeth at TEACH charter school where he invested years in children from a variety of post, which includes serving as
Director of Community Relations & Special Projects.

A native of New York, Williams moved to Los Angeles with his family when he was just four years old in 1971.

“My mother had learned that community colleges in Los Angeles were going to be free and that encouraged her to make the move. It was about the future of education for her children,” he said.

That cross country journey has paid off for Williams who attended San Diego State University and walked on the basketball team. He earned his degree in political science and later went to law school at Pepperdine.

PPCS primary goal is to build citizens who participate in public policy. Williams has already developed partnerships with police agencies, fire agencies and all agencies that exist under local government.

“I am having them come and mentor my students. I am looking for Black and Brown mentors, like firemen and policemen so that can say to the students I was you, grew up right around the corner. That’s what I’m trying to formalize with my contacts,” Williams told Inglewood Today.

PPCS primary challenge is enrollment because of its proximity to a cluster of schools in the vicinity the pool for students is very small, but the opportunity is there to attract students from outside the community.

The data of PPSC success is documented with the top math scores from 2017-2019 and high achievement marks in other areas as well.

In addition to being a tuition free school, they also provide free school uniforms and emphasize safety as the first priority of all students.

Williams has a vast sports background, having learned to play basketball in the late Issy Washington’s Slam ‘N Jam youth league in Carson. He also starred at Carson High for Richard Mason and at San Diego State for the late and great David “Smokey” Gaines.

All men who have mentor him to inspire hope in the next generation of young people.

The Mission of PPCS is to provide learners with a safe, supportive, and dynamic learning environment that delivers a rigorous and engaging, college-preparatory. Through the study of public policy, our learners will be equipped with the knowledge, skills, and fortitude to advocate for themselves and their community through leadership and action.

PPCS alumni will earn college degrees in their chosen field of study, and advance to fulfilling careers where they promote economic development, social justice, and cross-border tolerance to impact public policy in a manner that benefits society. For enrollment information contact Frank Williams directly at cape4life@gmail.com (323) 205-7920 or https://www.ppcs.school

There Could Be More Income Tax Return Cash on the Table...