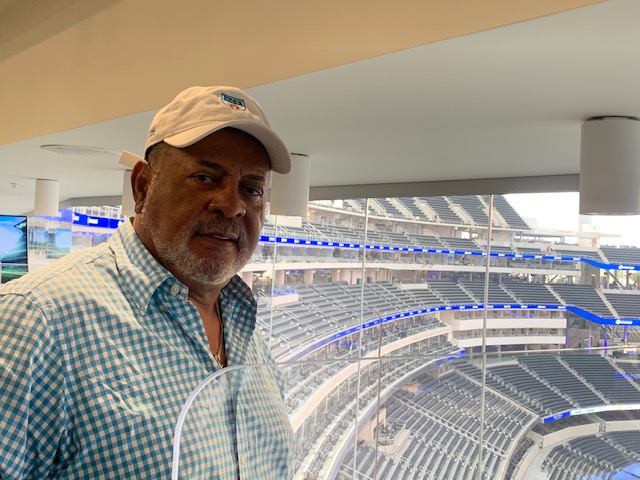 SoFi Stadium made its debut in Inglewood with the Rams defeating the Dallas Cowboys in the season opener. The magnificent $5-billion complex is just as exciting as the Rams’ decisive victory.

Inglewood residents watched the construction with anticipation for the last four years as the stadium took shape at the corner of Century Boulevard and Prairie Avenue. The 70,000-seat stadium is the most expensive sporting venue ever built in the United States and will host to both the Rams and the Chargers.

The stadium, which is highlighted by a swooping roof canopy, is covered in the plastic material ETFE, inlaid with lights which display different colors at night.

Beneath the canopy, the stadium bowl is carved into the ground to account for the LAX flight path overhead while an immense oculus display board is suspended from the roof.

SoFi Stadium will serve as the centerpiece of a roughly 300-acre mixed-use complex built on the former site of the Hollywood Park Racetrack. The project will eventually include: 25 acres of open space – highlighted by an artificial lake; 300,000 square feet of additional office space; a 340,000-square-foot expansion of the retail complex; a 300-room hotel; and up to 2,500 homes.

In addition the NFL will house a 200,000-square-foot campus which will serve as the new home of the NFL Network, NFL.com, the NFL app, and NFL Redzone.

To mitigate traffic congestion among the stadium, Forum and eventual Los Angeles Clippers Arena, the City of Inglewood is pursuing the construction of a 1.8-mile automated people mover system which would connect the venues with the Crenshaw/LAX light rail line.