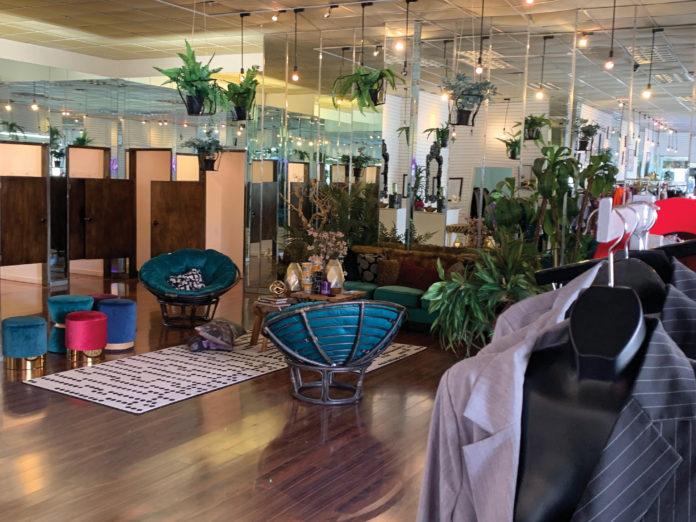 Our Righteousness’s are as Filthy Rags

It was a sermon by Bishop Ulmer, taken from the scripture, Isaiah 64:6 that inspired Gaynelle White and her husband David to launch Filthy Rags, the upscale women’s fashion boutique in Downtown Inglewood. These entrepreneurial co-founders and owners launched Philthy Ragz on 07-07-07 and have experienced exponential growth, with over 91,000 social media followers and customers, offering a complete line of custom made women’s clothing items from casual to high fashion.

The scripture explains, ‘but we are all as an unclean thing, and all our righteousnesses are as filthy rags; and we all do fade as a leaf; and our iniquities, like the wind…’ It was that message and the phrase ‘filthy rags’ that captured Gaynelle’s imagination and inspired her to establish a boutique that offers women a buying experience rather than an encounter.

Gaynelle’s fashion journey began much earlier when she found herself in a marriage with a drug-addicted husband and four children. Like many others, she offered, she suppressed her own ambitions in an effort to keep her family together, despite her husband’s missteps.

Working as an early child development teacher and later as a trainer for other teachers who were interested in early childhood development, she found herself in an agency headed up by a man who she described as a racist. When he insulted her, in front of other teachers, she swiftly decided that she would never work for anyone again. But, she did not know how to make money using her natural creative talents.

At that point, a friend asked her to design a ‘funky’ t-shirt that she could wear to a show featuring the woman’s handbags. With the use of a variety of textured materials, blended with tie-dye coloring, the item was a huge success and an executive with The Bernie Mack Show ordered 10 duplicates and offered $1,200. From that point, Gaynelle had found her calling and was soon on the fast track selling custom t-shirts on Melrose Boulevard and in other upscale West Los Angeles locations.

As her clothing items were featured in prominent retail stores, Gaynelle believed in herself and with her Faith, decided to cut out the well-heeled retailers and go directly to the consumers. On that Faith she rented a small retail space and opened her first boutique. The rest, as they say is history.

Filthy Rags’ Downtown Inglewood location, at the corner of Manchester and Hillcrest, is the largest retail clothing establishment in the city. It features a grand entrance that leads to an open space with lots of lights, mirrors, and of course racks of beautiful ladies garments. The ambience it provides reminded this writer of what he experienced when he accompanied Mrs. Sammy Davis, Jr. to Bijan’s in Beverly Hills, in the early 1990’s.

Dominique, a Philthy Ragzcustomer said, “I shop here often and pick up a matching jeans and t-shirt outfit for casual wear. The prices are competitive, the garments are unique and the location is terrific.”

Philthy Ragzclothing lineup includes the full range of women’s fashions that may be worn in the boardroom or to an after six cocktail party or to a Los Angeles Clippers game or to her son or daughter’s Saturday sports event. Gaynelle describes her lineup with stretch fabrics as ‘casually sexy clothing,’ and is proud to include among her long list of customers artists, actors and entertainers including Mary Mary, Erica Campbell and Terry Shepherd, to name a few.