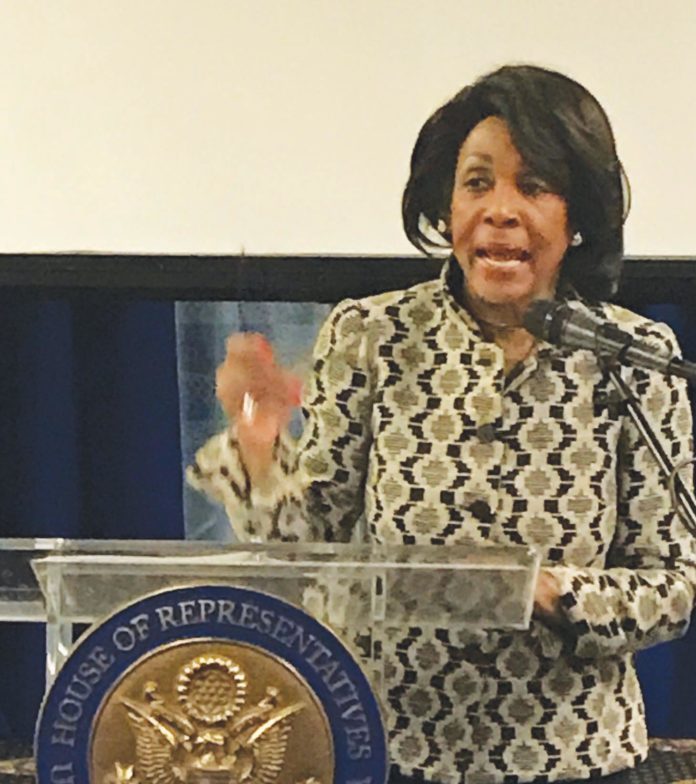 Congresswoman Maxine Waters (D-43), considered as one of the most powerful women in American politics, ushered California’s new voting system at the Crenshaw Christian Center on Saturday Nov. 23.

Rep. Waters was joined by the Los Angeles County Register Recorder County Clerk Dean Logan to introduce the new voter system that will be implemented in 2020.

“So, here we are in the state of California where some of the jurisdictions, not all of them have decided that they are going to be involved in a new voting system,” she added.

Rep. Waters challenged the clerk to make sure that the voting system that will impact the region’s 5.5 million voters and that it is up to speed so that everyone is included and that voter suppression does take place like it has been documented in southern states.

She also urged Logan to make sure that the process is accessible.

“You can’t have a new voting system and not everybody knows what it is. Can you imagine folks my age who all of a sudden don’t have the same voting place they have been going to for 25-30 years? They will wake up and they will say, what happened to my polling place if they don’t have the information about the new system,” The Congresswoman stated.

Rep. Waters said not having a polling place is one thing that scares her, but she believes there are lot of possibilities with this voting system if we get the word out, as the event last week was planned to achieve.

She has charged Logan and his office to educate and provide transportation to learn about the new electronic voting system.

Logan and his office has scheduled some 300 hearings throughout the region, but Rep. Waters argued she would like to see more and that cost can not be an option on a matter so significant.

The new system will not replace paper voting, but will offer same day voting, increase the number of days to11 instead of the usual one day, and voting by mail will be accessible with over 150 drop-offs available throughout Los Angeles County.

There will also be instances where mobile polling stations will be brought into some communities and the ballot will be available in 13 different languages.

Logan is hailing the new system as a new voting experience with a computer tablet in the voting booth, but as Rep. Waters indicated the difficult part is informing and enlighten the community as to what this new system is.

“We will have an opportunity for same day registration. I can’t tell you how exciting that is. Often times when we are trying to encourage people to vote, they will say I’m sorry I’m not registered to vote, there is not going to be any excuse now, “ Rep. Waters continued.

2020 blurred by COVID cloud and death of Kobe Bryant