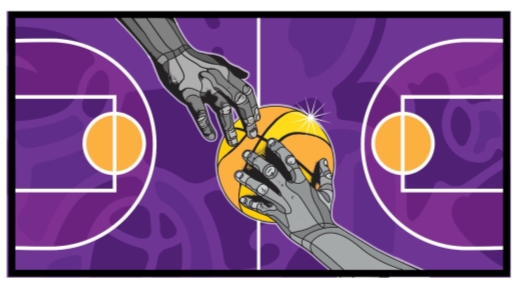 Rogers Park in Inglewood located on 400 W Beach Avenue Beach will be the site of basketball court artistic refurbishment on March 4 from 12p.m. to 3:30p.m. to celebrate the series premiere of WINNING TIME: THE RISE OF THE LAKERS DYNASTY, that airs March 6 on HBO and streams on HBO Max.

The collaborative effort led by HBO which teamed up with Project Backboard and California artist David Flores to refurbish the court at Rogers Park. The court design will be unveiled March 4 during an exclusive, all-day event, with programming to include a community dedication ceremony followed by an influencer skills camp led by celebrity basketball trainer and show consultant Idan Ravin.

The colorful court is inspired by the glitz and glamour of the Winning Time era of basketball and the nostalgic 1980s key art from the show, all that occurred while the Lakers played their homes games at the Forum in Inglewood.

The ten-episode series debuts SUNDAY, MARCH 6 (9:00-10:00 p.m. ET/PT) followed by additional episodes on subsequent Sundays at the same time. The series debuts on HBO and will be available to stream on HBO Max.