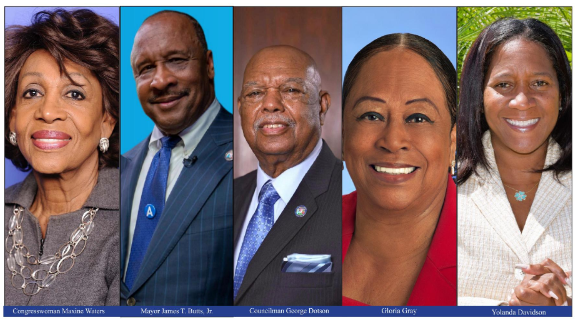 While there were many candidates who were quite optimistic after Nov. 8 General Election as 1,318,093 (23.42%) of 5,627,796 registered voters cast their ballots, but none released jubilant campaign celebratory photos boasting victory, although some results that seem inevitable.

Starting at the top of the ticket in Inglewood where a hand full of relatively unknowns tested powerful Mayor James T. Butts, Jr. as we went to print the incumbent had more votes by himself than the entire field combined.

Still Mayor Butts was measured when reached the morning following the election saying that he has nothing to celebrate because the results have not been certified and votes will not be finalized until possibly Nov. 11.

Los Angeles County Registrar results available at deadline showed Butts ahead 55.64% and 6,432 votes while his closest candidate Fredrisha “Sha” Dixon had 15.97% and 1,846 votes.

One the one hand the conclusion could be reached that the name recognition and most importantly money was too much for any of these novice aspirants to overcome, or one could argue if Dixon had the money perhaps, she could have been a threat. What we can say for almost certain is that Buts will continue to be mayor of Inglewood after all the votes are tabulated.

On the other hand, in the hotly contested Inglewood District 1 City Council the name recognition of West Basin Municipal Water District board member Gloria Gray could be enough to force a runoff with incumbent George W. Dotson. Dotson accumulated 32.34% and 1,199 vote to Gray’s 23% and 873 votes. If no candidate earns more than 50 percent of the vote then a runoff is conducted between the top two finishers to determine the winner.

Inglewood activist Yolanda Davidson was third with 21% and 790 votes, so there is a possibility that she could be among the top two when all the votes are counted.

In Inglewood City Council District 2 seat, incumbent Alex Padilla had garnered a whopping 68.03% and 1,983 votes over Bobby Brown who mustered 31.97 percent and 932 votes. Those numbers certainly were not Brown’s prerogative to put it lightly.

Measure C, the Inglewood ballot initiative that attracted millions of dollars in support of both sides, could be poised for defeat if it can comeback from being down 6,163-5,359 for NO.

This is an ordinance to establish minimum wage for certain employees of privately owned covered healthcare facilities. A Yes vote allows the ordinance to establish a $25 per hour minimum wage, subject to annual increase, for certain employees employed to work at or by a privately owned covered healthcare facility located within the City of Inglewood, and provide for enforcement by the City, a Healthcare Worker or their representative, or another person acting on behalf of the public be approved?

Prominent established political figures joined with the unions in support of HC, but private health care facilities poured in boatloads of money to prevent it with a No vote.

In other statewide races or measures; Measure A allowing for the Sheriff to be removed was leading big, Measure C, the cannabis tax is a lock to pass, Gavin Newsom will return to the governor’s mansion, Congresswoman Maxine Waters was polling at 73.88%  against Republican Omar Navarro in 43rd Congressional District; the hopscotching Sydney Kamlager was trouncing Jan C. Perry in the race to replace Rep. Karen Bass in Congressional District 37; In the 61st District State Assembly Tina S. McKinnor was running up the score against an opponent who surrendered following the primary but who name remained on the ballot. Robert Pullen-Miles is the current mayor of Lawndale and decided to campaign to remain mayor instead of challenging McKinnor, but by his name remaining on the ballot he accumulated more votes 19,146, more than 17,000 more than he did for mayor, but McKinnor’s lead of 10,000 votes appears insurmountable. Pullen-Miles was leading the Lawndale mayor race where he’s polling beyond 70 percent.