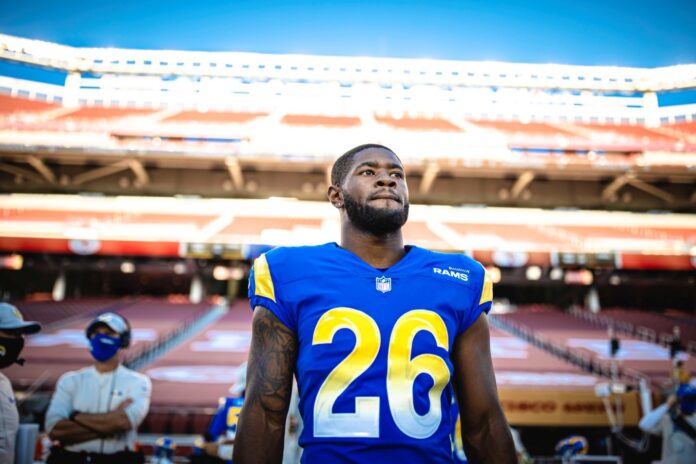 Los Angeles Rams rookie Safety and Southern California native Terrell Burgess took a couple of hours out of his day off this week to pay a virtual visit to Operation Progress youth. He discussed the obstacles he faced and overcame during his journey to the National Football League and the Los Angeles Rams and engaged youth and other participants in a Q & A session. A video Zoom Link was established and moderated by the Los Angeles Brotherhood Crusade where participants were able to text or video chat directly with Burgess.

Operation Progress’ mission is to empower underserved youth to become educated, ethical, and productive adults who reach their full potential and positively contribute to society. The organization serves youth through unique collaboration between LAPD, high-performing schools, college acceleration programs, and the Watts community.

The pillars of Operation Progress, to aid in the positive growth and development of our youth, are academics, health and wellness, life skills, service and support and safety. Burgess touched on many of these elements during his two-hour exchange covering a broad range of topics ranging from his early motivation as a high school student and the mentoring that was provided by his grandfather, mother and older brother, to a typical week as an National Football League member, his diet and his early commitment to helping special needs children and adults.

Burgess was a standout basketball and football player in high school and admitted that it was his older brother, with whom he continues to compete on a regular basis, who encouraged him to focus on football. With numerous college offers to consider, he first visited the Utah campus and was immediately taken by the people who made him feel welcome, the academic and athletic program and the beauty of the State of Utah. None of the other college visits compared to Utah and he looks back on his experience there as good as it could have possibly been.

Burgess realized in his senior year that he had the ability to play professional football and began to set his hopes on being drafted by an NFL team. He noted that when he was notified that he had been drafted by the Rams, it was one of the happiest days of his life. “Each day I wake up and think about how blessed I am to be able to play football every day as a job,” Burgess said. “I have always been a humanitarian,” he added, “and my experience with the special needs community has instilled in me a desire to always help others who are less fortunate and helped me appreciate the fact that I am alive and well- recognizing that it is better to be six feet above ground than six feet under.”

Wearing a black sweat shirt with the word HUMBLE prominently displayed on his chest, Burgess’ remarks, demeanor and presentation matched a humble persona. He did not flaunt his accomplishments or flash any expensive jewelry. He delivered sincere, open and honest answers to questions about his life, his accomplishments and his desire to do anything he can to help someone, making the world a better place.

“If you believe in yourself you can make it.” He concluded.