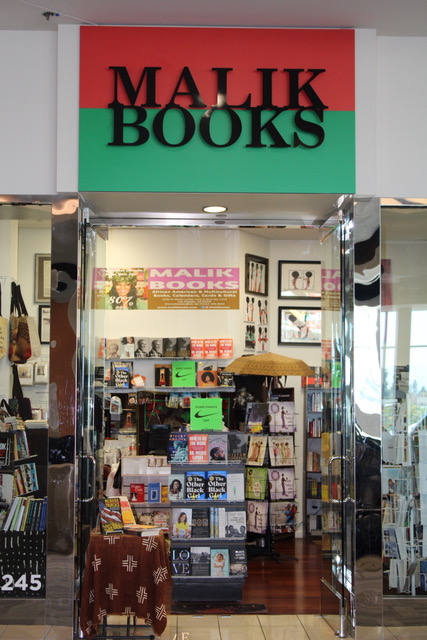 For the past 15 months in the trenches of a pandemic, most nonessential businesses have been in for a tough fight of survival. But as people all over the world were forced to remain still– and at home– two things remained to fill the empty void: television and books.

During the extended period at home, many people dove into novels and even nonfiction, historic texts– especially during the world-wide racial reckoning that took place in the aftermath of the murder of George Floyd. After May 25, the day of the senseless murder, books about race were flying off of shelves everywhere.

This eagerness for education, understanding, and allyship during one of the toughest and most unfortunate events in modern American times certainly played a part in keeping many bookstores afloat while so many other retail businesses were folding.

Malik Muhammad is the owner of ‘Malik Books’ in the Baldwin Hills Crenshaw mall. He shifted his business model during those times to cater to home deliveries. After targeting customers to the company website via social media, Muhammad made it easy to place orders online. And once the orders began flowing in, he turned the experience into a family-affair with his spouse and children. “We made the deliveries as a family, that was the way we got out of the house during the pandemic. We went around and did contact deliveries to people if they were local,” says Muhammad.

But even aside from the online book orders, Muhammad also credits the influx of cash donations that came in from community members. “Between the website and the community’s donations, that’s how we survived the pandemic. If it wasn’t for the people who helped support Malik’s during this time, I don’t even know if Malik’s would be here.”

As grateful and excited as Muhammad is for his bookstore to have made it through to the other end of the pandemic, as restrictions are now lifting in Southern California it’s hard not to notice the slow pace of the Baldwin Hills Crenshaw mall, where the store is located. Foot traffic is low as of now, but his fingers are crossed that things pick up as more and more people return to their leisurely activities of day-to-day life.

Jazzi McGilbert, Owner of ‘Reparations Club’ near the corner of Crenshaw Boulevard and Jefferson Boulevard, did not have an online store at all before March 2020. “We flipped the switch on pretty quickly and let our community know that we were closed, and people really rallied behind us.”

McGilbert also implemented a home delivery service to those who lived within a certain mile radius.

But for Reparations Club, things are quickly headed toward business as usual. McGilbert was then preparing for the first event at her bookstore since the pandemic began. In a matter of hours, a bright-eyed, zealous crowd would soon fill the store as writer, producer and comedian Quinta Brunson would be holding an author talk and book signing.

McGilbert knows that even though most people are thrilled to live full lives again, it will still be a step-by-step climb back to the old times of events and gatherings. She considered this night as an opportunity to test the waters. “We’re expecting a good turn out, but we’re going to wait and see how this one goes before we plan some more. But we are planning more!” says McGilbert.

Not only did Black-owned bookstores survive the pandemic, but also a new one is being born. In downtown Inglewood on Queen Street, Asha Grant will be opening ‘The Salt Eaters Bookshop’ after a successful GoFundMe campaign in 2020. Grant received an outpour of financial contributions from people all over the world, catapulting her dream into reality.

The Salt Eaters is expected to open this year.

Each bookstore success story has the common denominator of community support– customers and readers making it a priority to uplift these businesses and not allow them to fall through the cracks. When it comes to books and storytelling, Black stories that are told by Black people are imperative, and it seems as though most people agree.