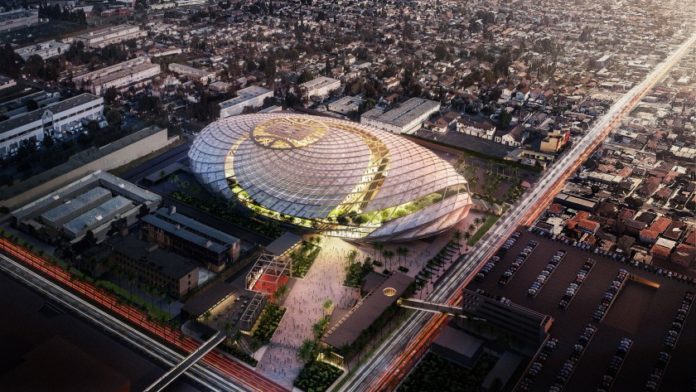 The Federal Aviation Administration on Monday reaffirmed that housing cannot be built on the site of the proposed LA Clippers arena in Inglewood.

“The FAA does not support the reintroduction of single-family or multi-family residential uses on the Noise-Impacted Parcels,” David F. Cushing, the FAA’s Manager in the LAX office, wrote to Inglewood Mayor James T. Butts.

“Such residential redevelopment would increase residents’ exposure to aircraft noise and is inherently inconsistent with the intent of the City’s land acquisition/noise mitigation program, approved and funded by the FAA,” Cushing wrote in the August 26 letter.

Cushing noted that the FAA has paid millions over the years for former residents in the area to relocate and escape the unhealthy jet noise.

The FAA letter deals a blow to attempts by Uplift Inglewood and the Madison Square Garden Co., which owns the Forum, to kill the proposed arena by claiming that the land should be used for housing.

With MSG’s financial backing, Uplift Inglewood has sued the city, claiming it violated the state’s Surplus Land Act by failing to solicit proposals for affordable housing on the parcel before signing an exclusive negotiating agreement with the Clippers.

But Cushing’s letter, sent in response to a July 17 update from Mayor Butts about the arena plan, made it clear that the FAA considers the idea of building housing on the site  unacceptable.

Cushing referred to FAA relocation grants that allowed residents to escape the health impacts of aircraft noise, which has been recorded at 65 decibels – about the level of a hair dryer or vacuum cleaner. The parcel is in a part of the flight path where the jets are at their lowest altitude over Inglewood.

As part of its eligibility for the grants, the city committed to promoting only commercial uses for under the flight path. To that end, Cushing said plans for the Clippers to build an 18,500-seat basketball arena on the city land was compatible with the FAA’s noise rules.

“By your letter, the City intends to ensure future compatible land-use of the Noise-

Impacted Parcels by developing them for commercial-use and excluding residential uses,” Cushing wrote. “Specifically, the proposed NBA basketball arena project appears to be a compatible land-use for the Noise-Impacted Parcels.”

Cushing wrote the FAA would need additional information about the proposed arena’s height and configuration to make sure it didn’t pose a hazard for planes descending to LAX, which is two miles to the west.

The FAA made a similar request of the Los Angeles Rams owner Stan Kroenke, who won FAA approval by sinking the stadium 100 feet below ground level so that it would conform to FAA height requirements. The bowl of the new Clippers Arena would be below grade as well.

Butts hailed the FAA letter as confirmation of what he and other city officials have been saying all along.

“We have long been focused on providing more affordable housing to the citizens of Inglewood, and have added or approved more than 600 units over the past seven years to do just that,” Butts said. “But the FAA’s finding confirmed what we knew to be true – this land cannot be used for housing, period.”