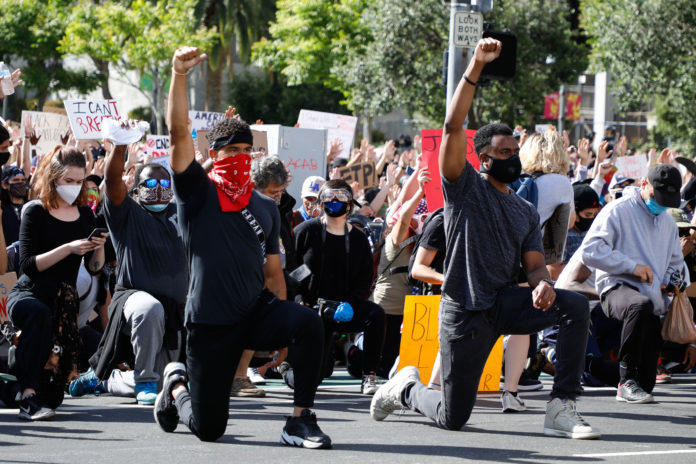 Perhaps the most defining moment in American history was not Martin Luther King Jr.’s March on Washington, or any of the riots of civil unrest that has chronicled police brutality and racial oppression throughout our nation.

MLK represented peace, civility and unity; the riots of 1965 and 1992 sprang from police brutality and erupted into mass destruction upon the very communities that were victimized by racial profiling.

ALL PHOTOS BY zaydee sanchez

“Burn Baby Burn” was the war cry in ’65 and we can still recall Rodney King pleading during ’92 “Can we all just get along” after the four white LAPD police officers who beat him with their nightsticks had been acquitted in a biased Simi Valley courtroom.

All of these infamous moments in our lives inspired movements of systemic change, while few can argue that some changes in the system were made.

King moved the needle on segregation and won voting rights for Blacks, but while the riots brought about massive dialogue little has changed as the still invincible police decree continues insulates every police officer in America from criminal prosecution.

The murder of 46-year old George Floyd in Minnesota by rogue white police officer Derek Chauvin just might be the pin pulled from the grenade that could alter everything.

“Having been in law enforcement and seeing the Rodney King incident and so many other incidents where there were flash points of epiphany that something is wrong with the system, I would say that this is the one that is going to change things,” Inglewood Mayor James Butts Jr. explained to KCBS sports anchor Jim Hill during a interview during the height of the recent protest.

Butts was a busy man last week, appearing on MSNBC, FOX and local radio station KJLH during the most monumental crisis during modern history.

Still caught in the grips of the fatal coronavirus pandemic, the Floyd murder in broad daylight could not come at a worse time when communities and small business were crawling back into action.

As protest emerged throughout the nation, so too did civil unrest, riots and in some cities such as St. Louis and Louisville even shootings of police officers.

There are too many elements to this millennium revolution that not one can say for sure who are responsible nor can they pinpoint the end game.

Yes, the Floyd murder lit the fuse, but so too did economic despair, the coronavirus pandemic and past incidents of police misconduct, murder, racial inequality and who knows what else.

From New York to California, curfews have been implemented for the first time in decades to quell the protesting.

As this wildly unique movement manifested over the past week, leaders, politicians, professors, community activist have tried to figure out how to make sense of it.

Butts, is highly qualified because of his vast experience as a police chief in both Santa Monica and Inglewood and now as mayor of one the most stable cities throughout the pandemic.

He believes that this movement is going to change things, but not because everything about law enforcement is wrong and the people are bad, quite the contrary.

“There are so many great police officers and so many great departments. However in this country we have this agreement that we have a system of laws and rules that determine how people will behave; we have a economic system where people can make as much money or more money than they can ever spend, but at the same time we have people who don’t make enough money to eat,” stated Butts. “ And the thing that keeps that together is the offer of opportunity so that those that are here have hope that they will be able to better themselves and that you will enforce these laws fairly.”

The mayor told Hill the people who enforce laws, the police, the prosecutors, the judges, they’re people also.

How and where this current revolt against the system ends, is anyone guess.

However a good guess is that it will not end like the many before them.

This generation is not having it! They don’t want your proffer of a ballot. They are not fearful of being arrested or even losing their life.

They are not listening to your encouraging speeches.

As far as they are concerned they have seen that your way did not work and this is going to be their way. They are here now!

Testing in the U.S.